KAZAKH INVEST: National Pavilion of Kazakhstan presented at the International Exhibition in Shanghai 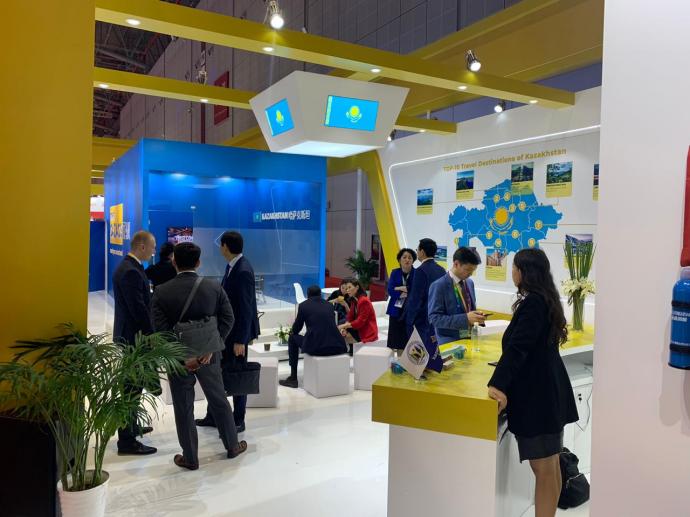 The organizers of this event are the Ministry of Commerce of the People's Republic of China, the People’s Government of Shanghai and the Expo China International Import Bureau.

About 30 domestic companies from food and agricultural sectors presented the Kazakhstan products in the National Pavilion with area of 180 sqm.

In addition, several meetings with representatives of international business were held and some promising investment projects were discussed on such areas as agriculture, tourism, information technology, finance, logistics, infrastructure development and trade.

“Today, China holds a leading position in the world in importing various products. Due to its strategic location and common border with China, the Kazakhstani manufacturers have an obvious advantage. As an aside, the representatives of international business took a great interest in investment projects and opportunities in Kazakhstan, which gives great opportunities for cooperation in the future” - said Galym Uzbekov, Deputy Chairman of KAZAKH INVEST Management Board.

During the exhibition, the export contracts were signed between Kazakhstan and Chinese commercial companies:

- Memorandum of Understanding to purchase 500 thousand tons of barley for CITIC.

According to “China International Import Expo 2019” organizers, seventy-eight exhibitors demonstrated their stand areas. From November 5th to 10th this year, 150,000 potential buyers from more than 100 countries are expected to attend this exhibition.

During the negotiations between the President of the Republic of Kazakhstan, Kassym-Zhomart Tokayev, and the Chairman of the PRC, Xi Jinping, which took place at the XIX meeting of the Council of State Heads of the Shanghai Cooperation Organisation in Bishkek on June 13, 2019, the Chinese side invited Kazakhstan to participate as an Honored Guest in the 2nd Chinese International Exhibition “China International Import Expo 2019”.

It should be noted that last year, over 3 thousand companies from more than 130 countries of the world took part in the 1st China International Import Exhibition in Shanghai. Two hundred of them are in the List of Global Fortune 500.

About 5 thousand items of various products and technologies were presented on a total exhibition area of ​​270 thousand sqm.

The event was attended by 18 Heads of States and Governments, as well as about 160 thousand buyers.

The People's Republic of China has the second largest economy in the world, and also ranks second in import and consumption. Over the next five years, China will import $10 trillion worth of goods and services, opening up opportunities for companies from around the globe to deliver their goods to China.