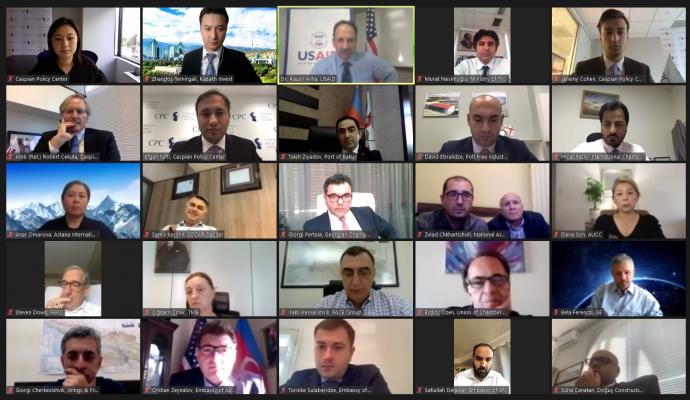 KAZAKH INVEST has actively participated in the international expert discussion dedicated to the Blue Dot Network (BDN) initiative. This remarkable online event was organized by the Caspian Policy Center (CPC) based in Washington D.C.

The Caspian region has become a hotspot for infrastructure investment over the last decade. With the region’s strategic location at the juncture of Europe and Asia, and its wealth of natural resources, the Caspian has become a critical area for projects promoting global connectivity as well as local development. With its rising status as a hub for infrastructure investment, the Caspian is a region where the Blue Dot Network is of increasing relevance. With a gap between the amount of investment available and the Caspian region’s anticipated funding needs to continue its development, the Blue Dot Network has the potential to raise the profile of projects that meet the Network’s standards.

CPC’s CEO Mr. Efgan Nifti opened the event with welcome remarks that were followed by introductory comments fr om the webinar’s moderator Dr. Kaush Arha, US G7 Sherpa for Blue Dot Network, and keynote speaker Mr. Javier Piedra, Acting Assistant Administrator for Asia at USAID. «The Caspian region has become a hotspot for infrastructure investment over the last decade. With the region’s strategic location at the juncture of Europe and Asia, and its wealth of natural resources, the Caspian has become a critical area for projects promoting global connectivity as well as local development»,said Mr. Nifti.

Mr. Zhandos Temirgali, Strategic Investment Projects Advisor to the Chairman of KAZAKH INVEST, has highlighted that «One of the key advantages of Kazakhstan is its favorable geographical position between Europe and Asia, which predetermines its significant transport and logistics potential. Strategically, it links the large and fast-growing markets (65% of the world’s GDP) of China and South East Asia and those of Middle East and Western Europe by automobile and railroads, as well as the ports on the Caspian Sea. Transcaspian route allows to deliver cargo quickly and effectively from the inner parts of China to the Middle East and Black Sea towards Europe.Investing in the transport logistics infrastructure along the Transcaspian is firstly high margin, and what is crucial it provides safe and low riskpath comparing to the alternative routes. Blue Dot Network is a tremendous opportunity for the countries of the region to implement new high-level infrastructure investment projects».

The Caspian Policy Center and U.S. Agency for International Development, in collaboration with the Embassies of Afghanistan, Azerbaijan, Georgia, Kazakhstan, Turkey, and Uzbekistan, brought together policy experts from U.S. government agencies and private companies, as well as senior business representatives from the countries of the Caspian region. A high-level U.S. delegation, headed by Dr. Kaush Arha, U.S. G7 Sherpa for the Blue Dot Network and including representatives from the U.S. Development Financial Corporation and the European Bank for Reconstruction and Development, lead the discussion on infrastructure development within the Blue Dot Network.

With a focus on private sector engagement, the event explored the vital role the business community plays in strengthening regional integration through infrastructure and commerce. Using a roundtable format, the event encouraged dialogue and discussion between the agencies overseeing U.S. participation in the Blue Dot Network, government ministries in the Caspian region, and private enterprises.

Blue Dot Network (BDN) is a multi-stakeholder initiative introduced by the United States, Australia, and Japan in order to promote quality infrastructure investments by certifying projects that are market-driven, socially and environmentally responsible, financially sustainable, transparent and accountable, and open and inclusive. Blue Dot Network will evaluate and certify infrastructure projects based upon adherence to commonly accepted principles and standards. Over time, the initiative will aim to raise standards in global infrastructure development, serve as a market signal for quality, and incentivize governments and the private sector to improve practices to obtain Blue Dot Network certification.

Caspian Policy Center (CPC) is an independent, nonprofit research think tank based in Washington D.C. Economic, political, energy and security issues of the Caspian region constitute the central research focus of the Center. The Caspian region, at the crossroads of the East and the West, is increasingly becoming a crucial area of global interest with its rich natural resources, geopolitical rivalry and economic development. Established in 2016, the Center aims at becoming a primary research and debate platform in the Caspian region with relevant publications, events, projects and media productions to nurture a comprehensive understanding of the intertwined affairs of the Caspian region. With an inclusive, scholarly and innovative approach, the Caspian Policy Center presents a platform wh ere diverse voices from academia, business and policy world from both the region and the nation’s capital interact to produce distinct ideas and insights to the outstanding issues of the region.